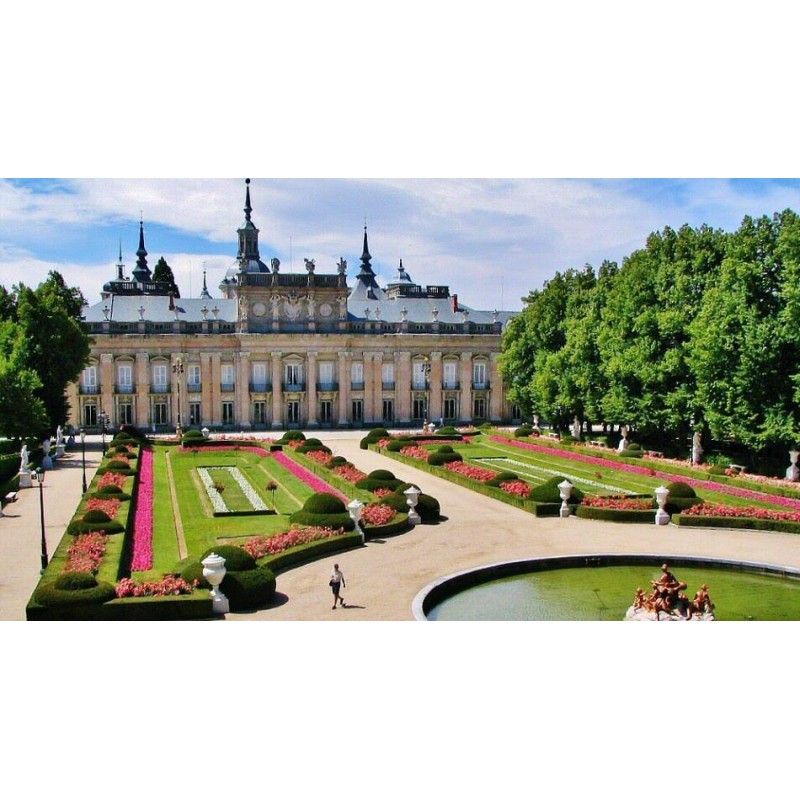 Our guided tour of the Palace of La Granja will take you through its beautiful rooms with frescoed vaults, tapestries, paintings, clocks and furniture of the eighteenth and nineteenth centuries. And there will be some free time for a promenade through its famous gardens, decorated with statues and fountains.Length of the tour: 5 hours (since we leave until we return to Madrid)

The royal palace of La Granja is located on the northern slope of the Guadarrama mountain range, about 90 kilometers from Madrid. Its name comes from an old farm, that Hieronymite monks of the monastery of El Parral in Segovia had here.Felipe V retired to this place in 1724 and during the next twenty years magnified the gardens and palace, which was used as a summer residence by all his successors until Alfonso XIII.

There are beautiful frescoed vaults, paintings and furniture of the eighteenth and nineteenth centuries, and a tapestry museum which exhibits a great collection of works from Brussels from the sixteenth century.The gardens are one of the best preserved examples of gardens of the eighteenth century, and were designed by the French architect René Carlier. White marble statues, and vases of the eighteenth century decorate the parterres and avenues, together with magnificent sculptures (in lead paint imitating bronze) in the fountains: Neptune, Apollo, Andromeda, the Anfitride Cascade in front of the Palace, the Baths of Diana, and Fame.The water for the fountains comes from a large reservoir called The Sea, located above the garden. By the force of gravity, as in the eighteenth century, some water jets reach 40 meters high, as the one of the fountain of Fame.Opening hours of the Palace of La GranjaWinter (October to March): Weekdays, Sundays and public holidays from 10:00 to 18:00Summer (April to September): Weekdays, Sundays and public holidays from 10:00 to 20:00(The tickets´desk closes one hour earlier)